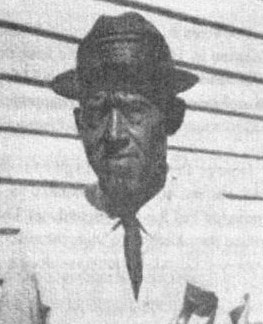 Thomas Jefferson Pressley
In 1916, the Foremans hired a young black man of seventeen to come and work for them. His name was Thomas Jefferson Pressley and he was still in high school. He was born May 17, 1899 near Broken Arrow and came to Muskogee in 1907 and spent a summer with his grandmother. His uncle, a Creek Freedman named W.C. Escoe, had been friends with Judge Thomas. He went back to Broken Arrow then and stayed until 1911. Then he attended one school year at Tallahassee Mission School beginning in the Fall of 1912. That school closed in 1913 so he came to Muskogee living with a cousin at 907 Market Street, and attended Manual Training High School. Where he graduated in 1920.

It was his job to milk the cow, named “Gentle Annie”, care for the horses, 250 chickens and 175 pigeons. The house was still on the outskirts of town. “The block across the street west belonged to the Judge and was used as pasture. There was only one small house on the whole block. On the block where the Judge’s house was, there was only his house, the Welch house, and two barns, the windmill, and the hen house. About in the area where the Rowsey house was later built (Northwest corner of 14th and Boston) was where we grew wheat and oats. Across the street to the north were Pattersons and nothing else anywhere but pasture. After the Judge’s death, the Foremans got rid of all the horses but one, and he was moved to their farm.”

Pressley was bright, amitious, and hard working. After he graduated from Manual Training High School, Grant asked him if he would be interested in going to college. He said he would.

Carolyn Foreman’s aunt and uncle in Chicago (Ella and Wm. Duff Haynie) knew an official of the Katy Railroad and helped him get on as a Pullman porter. He worked on a sleeper route between Chicago and Tacoma, Washington. Pressley, as he was called entered the Meharry Medical College Dental School in Tashville, Tennessee, in the Fall of 1921, and worked to pay his way through school.

After graduating, Dr. Pressley associated with a Dr. Wallace in Muskogee for a short time. He then went into dental practice in Bristow for a few years, but the Depression crippled his business. “The patients just didn’t have the money to pay and sometimes I pulled teeth for nothing if they were in pain.”  He returned to Muskogee in 1929. (From and undated interview with C.W. "Dub" West.


In 1929, when the Foreman's were planning another extended trip around the world, it is said that Grant saw Pressley on the street. Learning of his need of work and wanting someone to look after the house and grounds while they were away, a deal was struck. Pressley became their house manager and very dear friend. Mrs. Foreman said that if it had not been for his care of the home, they would not have been able to do their work as well.  He remained as cook, caretaker, and handyman. He lived in a small building at the rear of the home.

1947-Carolyn- “I do not attempt to grow roses any more. I have in my garden only such plants as will grow with the attention that our good Pressley can give them. I would rather spend my time writing or doing research, but still love flowers and gardens.”
​
In regards to the subject of the daily routine that the Foreman's had, Thomas Jefferson Pressley, described it in an interview done many years later. One case in point, concerning whether or not they had a car, radio, TV, he told a story about the radio. They were entertaining Mr. and Mrs. Weisendanger for lunch in December, 1941, when a phone call came from a friend, Mrs. Enos, that lived on 10th street. She excitedly told them that Pearl Harbor had been bombed and the United States was at war.  Mr. Weisendanger ran out to turn on the radio in his car so he could get more of the news. After that, the Foreman's purchased a radio but only listened occasionally to news.

As to a car, they never owned one. According to Pressley, in early days when the Judge was alive, he had a buggy and driver, as previously mentioned. As buggies went out of use, they would ride the street car, which passed in front of their house several times a day. Later, when the trolleys were made into buses, both Grant and Carolyn rode the bus. If they had need to go to the farm or out of town they would call and arrange for a car and driver. The driver they usually used was named Charles C. Brady. In the Muskogee City Directories he is shown to work for George E. Staner Used Cars. He probably had access to cars and could arrange for one most any time. (Mr.Brady died in February 1948, however, and it is unknown who drove after that.)

As to how they spent their time, Pressley said they wrote or researched morning and afternoon. He said they, “worked hard”. They after dinner, they read the Daily Oklahoman, Muskogee Phoenix, and Muskogee Times-Democrat thoroughly before going to bed.

He also said Grant would frequently go into town for some business, usually either riding the street car or walking. He would always bring her some little gift when he came home, either candy or some flowers.

Asked if they went to church, he said “no, they never did.” They did go to the farm about 4 miles from town every Sunday afternoon.

Most of their lives there was no such thing as air conditioning. After Grant became more frail, they had a window unit in the living room but didn’t use it much. Pressley laughingly recalled one occasion when Carolyn went somewhere, Grant stayed at home and the air conditioning was on. When she came home, he had all the windows open because he thought it was too cool.

After Grant’s death, their friend Nettie Wheeler, thought Carolyn should have a television. She bought her one and a small stand on wheels. Pressley put it in her bedroom so she could watch it. She did not like it and told him to remove it. He tried it in the living room and she still did not want anything to do with it. He finally moved it into a closet, covered it with a blanket and tied it with a cord. After she died, and her niece was going through things in the Home, she watched it some and took it with her when she left.

Pressley was being interviewed by C.W. “Dub” West and was asked to describe their temperament and to tell about them in general. He said he would use the word “unique” and that they were good to everybody they came in contact with, just “good people”. Asked about their sense of humor, he said he probably didn’t see Grant laugh more than a dozen times in all the years, that he was more stern. But, Carolyn had a more outgoing personality and liked to smile and laugh.  (C.W. "Dub" West interview Feb. 9, 1975)

In 1943, T.J. Pressley married, somewhat late in life, at age 44. He married Erma Lee McQueen Duncan. She had worked at Boeing Aircraft in Wichita, Kansas and Central Meat Market in Muskogee. She also had a son by a previous marriage, James Harold Duncan.

He attended Old Agency Baptist Church most of his life and served as Church Clerk most of those years.

Again from the West  interview, Pressley took care of Carolyn in her years after Grant’s death and was put in charge of the household money and spending the last two years of her life. She wanted him to keep about $15 on hand for expenses and they would draw more out of the bank as necessary. He did not spend anything on himself, only “his due salary.” His final care even included making a pallet on the floor of her room to hear her in the night if she needed help. He said she passed quietly a “little after 4 a.m. on February 18, 1967. She was not ill long but frail for some years. She was alert mentally until the end.”

Thomas Pressley, servant of the Foreman's for 40 years was retained as caretaker according to an article by Phil Harris June 14, 1970 in the Muskogee Times-Democrat.

“Pressley, himself, aided the Foreman's in their research-writing by his complete loyalty, efficiency and devotion. No matter where the Foreman's were in pursuit of various undertakings, they were without worry knowing that their home and all its possessions was safe and in good hands.” (Thomas-Foreman Home Collection)

To complete the story of Thomas Jefferson Pressley, he continued to keep his promise to Carolyn to take care of the home. He was employed by the Oklahoma Historical Society after the residence became a Historic Home site and is listed in the Muskogee City Directories from 1971 on as the Custodian of the Thomas-Foreman Home Museum, still living at 1209 S. 22nd.

Pressley’s wife Erma passed away March 7, 1994. Her obituary says in her younger days she “had traveled with the ‘Duke Specials’ and sang many songs, two of her favorites being ‘Thank You Sir’ and ‘Hold Out Until Tomorrow.’ Her funeral was held in the Union Baptist Church and burial was in the Oktaha Community Cemetery. (5) Thomas-Foreman Home Collection.

Excerpts from "Grant Foreman A Biography" by Linda Sue Moore