19 JANUARY 1914
Death of Judge John R. Thomas, of Muskogee, who was killed by convicts at the state penitentiary in McAlester yesterday was perhaps one of the best known and best loved men who ever lived in Oklahoma. He was sixty-six years of age, and a great part of his life had been spent in the service of his country elective or appointive offices.

Judge Thomas was born in Mount Vernon, Ill., and spent the greater part of his life in that state. The ten years previous to 1897, he was a member of congress from Illinois, being elected from the town of Anna, where he resided at one time.

In 1897 he was appointed district judge of the federal court of the northern district of Indian Territory, which office he held until 1901. In that year he retired to enter upon the practice of law. For the past several years he had been associated with Grant Foreman, he son-in-law, under the firm name of Thomas and Foreman. While in congress, 1879 to 1889, he was a member of the house naval committee, and chairman of the construction committee of that committee.  He was at one time grand master of the Masonic lodge in Illinois.

Judge Thomas came from a family whose scions have been among the most noted of the nation’s warriors.  His son, John R. Thomas, Jr., is a captain in the United States army, and is stationed in Honolulu. He was with Captain Allyn Capron’s troop as first lieutenant in the battle of Las Guasimas, and after Capron’s death commanded the troop through the balance of the Spanish-American war.

Besides Captain Thomas, Judge Thomas is survived by his daughter, Mrs. Grant Foreman.

Judge Thomas’ body was brought to Muskogee this afternoon and was taken to the home of his daughter, Mrs. Grant Foreman 1419 West Okmulgee avenue. The funeral will be held Wednesday afternoon at 3 o’clock from the residence Rev. Llwyd conducting the services. Burial will be in Greenhill Cemetery. [Judge Thomas was later reinterred at Arlington National Cemetery.] Written by Carolyn Thomas Foreman.
January 19, 1914

Judge Thomas went to McAlister State Penitentiary at McAlister, Oklahoma for an interview with Abraham Collier serving a 7-year term for larceny.  While in the Warden’s Office, the state’s most serious prison outbreak occurred.  There were three armed convicts: Tom Lane, Chiney Reed, and Charles Kuntz.  They converged on the warden’s office and said, “Stand up, everyone stand up.”  Judge Thomas reaches for his cane.  The inmates shoot and kill Judge Thomas; D. D. Oates, Assistant Warden; F. C. Godgrey, day sergeant; and H. H. Dover, in the corridor.  Also wounded were Mrs. Mary Foster (leg), J. W. Martin (cheek), and C. B. Woods (arm).*

The Judge was 68 years old.

*From an article appearing in The Chronicles of Oklahoma, Summer 1974 by J. Stanley Clark. 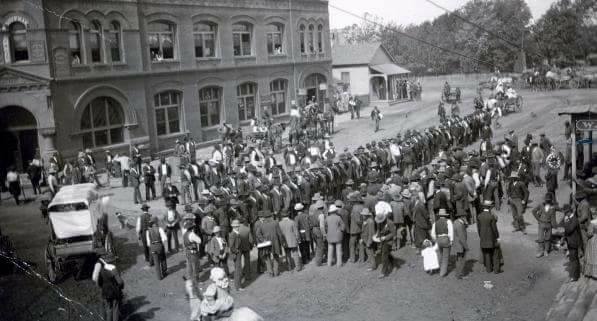 Civilians lined up to enlist in Muskogee, Indian Territory, 1898 during the Spanish American War.